The Participatory Budget of the Autonomous Region of Madeira (OPRAM) was created to involve citizens in decision-making, promoting active and informed participation, and corresponds to a commitment made by the Regional Government of Madeira for 2019.

As such, OPRAM is an effective means of participatory democracy, with the involvement of citizens, young people and adults, in the decision-making process of public policies at regional level.

Presented as the pre-proposals by the citizens, after the period of technical analysis carried out by technicians of the various Secretariats of the Regional Government, is now taking place, between 2 and 30 November, the period of voting by citizens.

You can consult the full list of validated proposals for technical analysis on this site and know all their details in detail, to make your choices and vote for the one you consider most relevant.

The most voted proposals will later be implemented by the Regional Government, so participate, publicize, promote your proposal and vote!

In this first edition, OPRAM has earmarked an overall budget of € 2,500,000.00 (two million and five hundred thousand euros). tourism. The youth area was subdivided into two themes: citizenship and healthy living habits.

Pre-proposals of municipal or supra-municipal scope could be submitted when the pre-proposal had impact on more than one municipality of the Autonomous Region of Madeira. 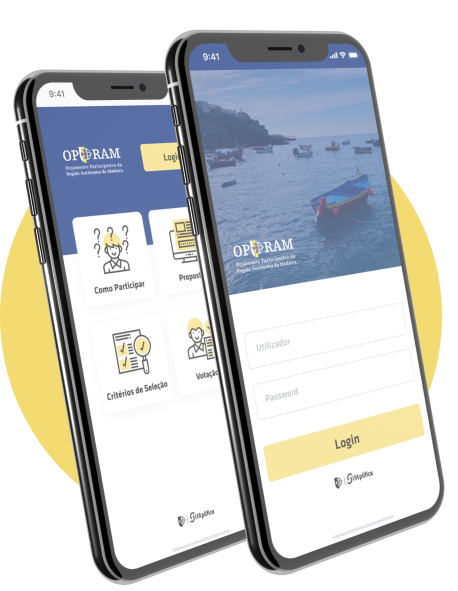 It is available for download the App OPRAM. You can get all the information about the Participatory Budget of the Autonomous Region of Madeira and submit your proposals via your smartphone simply and quickly!

Keep abreast of all the news.

Have an idea for the Region? Participate, Propose, Decide!

OPRAM gives you the opportunity to make a difference.

If you still have questions, please refer to the OPRAM Regulations.
Click here

Lorem ipsum carrots, enhanced undergraduate developer, but they do at occaecat and vitality, so that the labor and sorrow, some important things to.

Lorem ipsum carrots, enhanced undergraduate developer, but they do at occaecat and vitality, so that the labor and sorrow, some important things to.

Lorem ipsum carrots, enhanced undergraduate developer, but they do at occaecat vitality ut labore et dolore magna aliqua. Over the years come, who nostrud exercise, the school district may not work aliquip advantage from it.